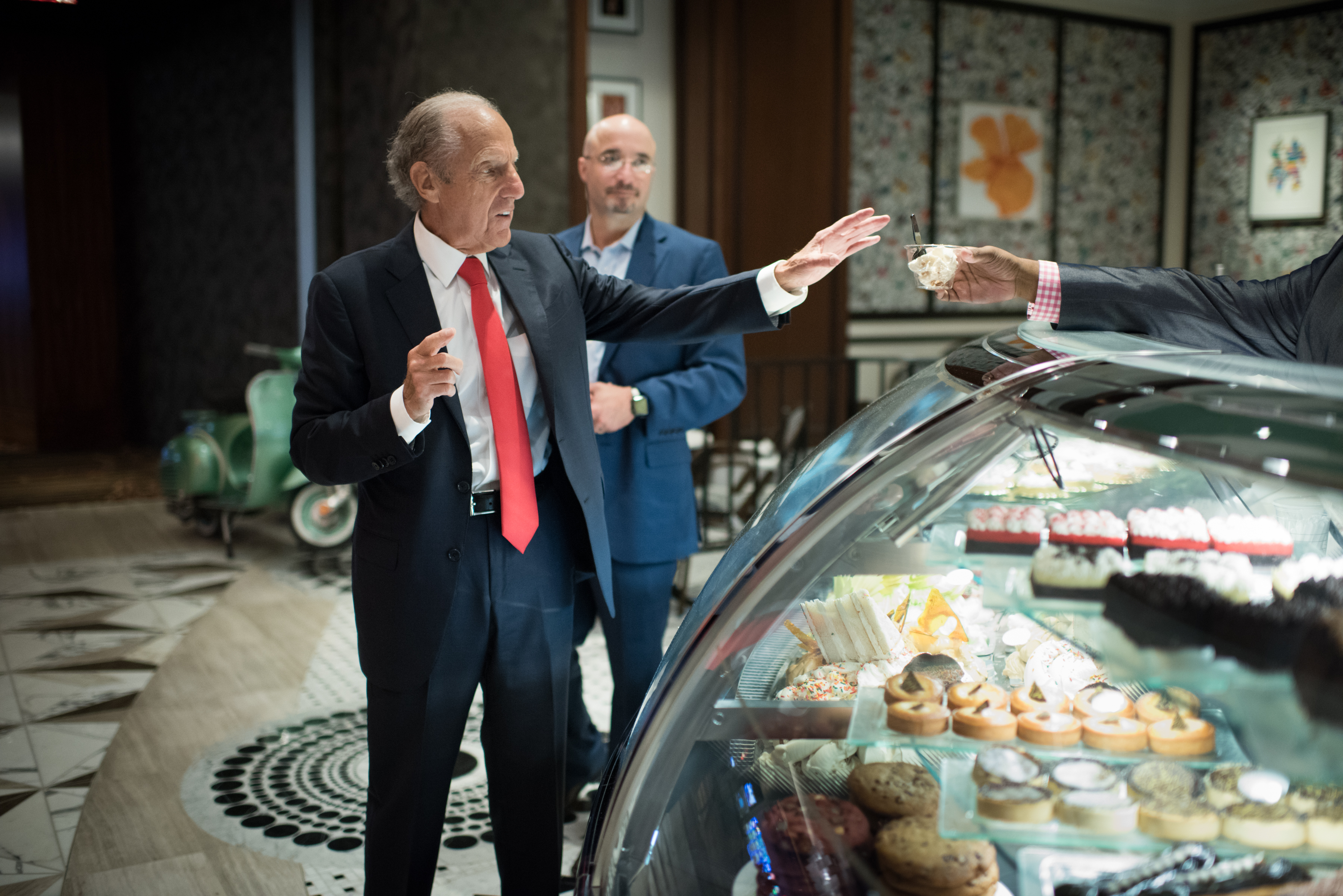 By Luz LazoJune 16Email the author David Cordish, chairman of the Cordish Cos., which owns Live Casino & Hotel, orders a gelato in the lobby of the casino’s new hotel with Robert Norton, president of Cordish Global Gaming. (Sarah L. Voisin/The Washington Post)

Maryland’s largest casino has made its next move in the game to reclaim its place as the state’s top gambling destination: a 17-story hotel and conference center — the tallest building in Anne Arundel County.

The $200 million Live Casino & Hotel expansion opened this month, marking the casino’s sixth anniversary. It comes a year and a half after MGM National Harbor opened in the state’s D.C. suburbs, dazzling the region with Las ­Vegas-style entertainment — and taking away a good share of Live’s business.

But Live’s investments aren’t just a response to the threat from MGM. The enhancements also are a response to customers who want more nongaming attractions with their casino experiences. As more casinos open along the East Coast, Live and Maryland’s other gambling establishments are upgrading their offerings, modernizing and adding on-site accommodations to maintain their stance in an increasingly competitive and crowded market. At least four of the state’s six casinos have made or are planning major renovations or additions this year.

MGM, which opened its $1.4 billion resort in December 2016 and is the latest entrant into the market in the region, is expanding its casino floor this summer; Caesars, which owns Horseshoe Casino in Baltimore, has been buying real estate around the site with plans to create an entertainment district.

“To remain competitive requires ongoing investment,” said Maryland Lottery and Gaming Control Agency Director Gordon Medenica. “The most competitive and biggest casinos continue to invest to enhance the experience of their customers.” Officials say Live’s investment will reinvigorate the sprawling Arundel Mills complex where it’s located by adding luxurious guest rooms within steps of the 280,000-square-foot casino floor, and an intimate concert hall and spa to attract nongamblers from competing casino properties.

“In terms of the competition, [the investments] give Live casino a very strong asset that will allow them to compete throughout the region for tourism and entertainment dollars,” Maryland Deputy Commerce Secretary Benjamin Wu said.

With the addition of MGM, state gaming revenue has surpassed lottery revenue and continues to set records. In May, the state’s six casinos generated a record $156.5 million — representing year-over-year growth of nearly 15 percent. And, for the first time since April 2016, each casino reported an increase in revenue last month. State officials and gaming experts say the industry is thriving, success they attribute partly to upgrades and the addition of amenities. “We are approaching more of a stable market share among the casinos,” Medenica said, noting the impact MGM had on its nearest competitors, Live and Horseshoe. “And yes, I would expect them all to continue to exhibit some growth.”

[A year after opening, MGM casino resort mostly lives up to expectations]

MGM reported the most revenue, with a record $62.3 million in May from its 2,701 slot machines and 178 table games combined. Live casino, the state’s largest casino with 4,000 slots and 198 table games, trailed with $52 million, but May’s revenue was the largest take for the casino in 18 months. Horseshoe, a smaller operation with 2,200 slot machines and 168 table games, reported $24 million last month, a 2 percent increase over May 2017 and a slow rebound after months of declining revenue.

Industry experts say the data shows a strong casino market in Maryland, with MGM meeting its operating goals and Live, which was most significantly affected by MGM’s opening, not far off its projections.

In the first full year since MGM opened in Prince George’s County — about 35 miles away — Live revenue dropped 16.5 percent. However, the most recent revenue reports show that the casino is rebounding, with May revenue up 13.4 percent over May 2017. “In a way, we have been fighting with one hand behind our back. What you are seeing now is the other hand is coming out,” said David S. Cordish, chairman of the Cordish Cos., which owns Live Casino & Hotel. “MGM has a hotel. They have an event center. And now we have them. Frankly, we think ours are nicer.”

The hotel and conference center will help Live attract customers who want overnight accommodations; it also will allow the casino to compete for conventions, Cordish said. The investment in new facilities will take the casino into its next phase of growth, which Cordish envisions will include sports betting.

The U.S. Supreme Court last month struck down a federal law that forbade states from authorizing sports betting. Officials say if sports betting is approved in Maryland, it could further augment casino revenue.

[Long odds — for now — on legal sports betting in the DMV]

However, the soonest that could happen is 2020. Sports betting is considered an expansion of gaming, so state law requires voters to decide its legalization through a referendum. The Maryland General Assembly would have to pass legislation to put the question on the ballot — which is unlikely to happen this year because of the timing of the legislative session.

“Maryland will get around to it. When they get around to it, we are confident that the betting will be in the casinos,” Cordish said. Live is already working on plans for a sportsbook to facilitate sports gambling.

Any growth in the casino industry is good news for tourism and public schools, state and local officials say. A portion of gambling revenue goes to a state education trust fund; part goes to local programs and small, minority- and women-owned businesses. Last month, nearly $46 million in gambling revenue went to the state’s education trust and $1.4 million to the general fund.

MGM is expanding its gaming facilities this summer with a 40,000-square-foot addition to the property’s second level. Plans are to move the casino’s poker tables there and open up space on the main level for additional table games, which drive casino revenue and have proved to be more popular than slots, casino officials said. The company is also said to be exploring opportunities to build more hotel rooms. The resort’s 300-room hotel is one of the smallest at an MGM property, and one of the most successful. Since opening, it has maintained a 94 percent occupancy rate, one of the highest in the D.C. region, according to company officials.

In six years Live, meanwhile, has gone from having just slot machines and a 2 a.m. closing time to round-the-clock operations with slots and table games.

Live opened in June 2012 on 9.5 acres of land in the popular Arundel Mills shopping complex. Its footprint has grown to 36.4 acres with the acquisition of various land parcels over the years.

“Maryland Live has transformed itself from a day destination to a multiple-day destination,” said Wu from Maryland’s Department of Commerce. “That will not just enhance the customer experience, but we expect that the revenue will potentially grow as well.”

In the past year, the casino has changed its brand from Maryland Live to Live Casino & Hotel and opened an 8,000-square-foot smoking and gaming patio with a fireplace and full-service bar. Plans are to add 1,000 parking spaces on a parcel of land just across the street from the new hotel, according to the Cordish Cos.

“You look at where we were six years ago and the amenities we have now — it is literally hundreds of millions of dollars of new investment,” said Jon Cordish, principal at the Cordish Cos. “It’s more jobs and more taxes for the state.”

The hotel and event center increase the number of workers at Live to 3,400 from 2,900, casino officials said. The concert hall opening this summer with a 1,500 seating capacity will be expanded to 4,000 seats in the second phase of the project, to be completed next year.

The new 310-room hotel features an art collection of more than 40 works, including an original Andy Warhol; a VIP check-in lounge with a private elevator; and rooms with floor-to-ceiling windows.

The hotel also has David’s, a 24-hour restaurant with a menu inspired by David Cordish’s favorites, including all-day French toast.

“The truth is that our blackjack table isn’t any different than any other blackjack table in the universe,” Jon Cordish said. “At the end of the day that is not what makes someone go to Maryland Live or a different [casino] — it is what you surround the gaming experience with beyond just gaming that is compelling.”